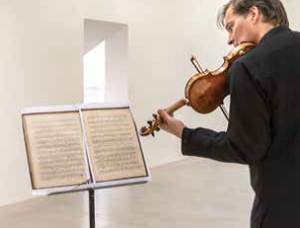 Tomorrow, the Rockport Chamber Music Festival welcomes violinist Philippe Graffin. Most notable in his program is an unfished sonata by Eugene Ysaÿe that Graffin completed after discovering the piece in 2017. Below is an excerpt from the program notes detailing the sonata and how Graffin used Ysaÿe’s earlier work to guide him.

“The genius of Bach frightens anyone who would like to compose in the medium of his solo partitas and sonatas,” Ysaÿe declared almost a century ago. Nevertheless, although he composed eight violin concertos, his best-known composition remains the Six Solo Violin Sonatas, Op. 27, from 1924. They were inspired by a performance of a solo Bach sonata by the young Hungarian Joseph Szigeti. The two musicians, Szigeti at the beginning of his career, Ysaÿe almost at the end of his, discussed the small amount of substantial music in the solo violin repertoire. Ysaÿe wished to rise to the challenge of adding to it. He retreated to his seaside villa at fashionable Knokke-le-Zoute and, within 24 hours, came up with an outline of seven new sonatas, “conceived through and for the violin.” He spent the next few weeks preparing six of the works for publication, each dedicated to a leading violinist of the younger generation. 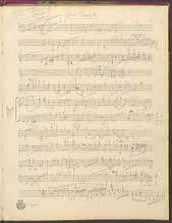 The seventh sonata, inscribed “6eme Sonate (a Quiroga),” was entirely overlooked and went unmentioned until Philippe Graffin came across it in Ysaÿe’s sketchbook in the summer of 2017. “I realized to my astonishment that it was an independent piece,” he says. “There was a substantial first movement, a middle movement with the title Canzona and a third movement that cuts off after 12 staves. It contains one of the greatest movements of the entire sonata cycle: the beautiful and enigmatic Canzona, with its amazingly inventive accompaniment.” Graffin set to work editing a performing edition and completing the finale, giving the premiere in May 2018 at the Brussels Conservatoire—where Ysaÿe’s aforementioned sketchbook is now housed. It is fitting that Graffin is a professor at the Conservatoire, where Ysaÿe, himself, both studied and taught.

The opening movement is virtuoso in its impact, but with virtuosity put at the service of the music’s melodic and harmonic expressivity and not an end in itself. In pushing violin technique to new heights, Ysaÿe employs double, triple and quadruple stops, with complex trills and bowing, but there’s always a graceful lyrical line lurking somewhere in the mix. This is at its most exposed in the carefully crafted central Canzona movement. The single line of an upward climbing then descending theme is soon joined by a second voice, adding, at first, a chromatic and then contrapuntal contribution to the somber, restrained mood. A third fluttering, tremolando voice, adds a feeling of anxiety to a highly expressive movement. A crisp, decisive and somewhat bucolic theme opens the brief finale, marked giocoso (playful). It’s followed by three variations, brilliant and florid at first, then alternately scherzo-like and high-flying. A cadenza-like section concludes with a plunging, pizzicato descent borrowed from the Fifth Sonata. A return of the opening theme and a brilliant coda seamlessly round out the piece. “Throughout the process, I used elements mainly from the published Sixth Sonata, which I transcribed,” Graffin says. “And I observed how Ysaÿe develops his ideas in that sonata. My view was that the new material should come entirely from Ysaÿe.” (Philippe Graffin, quoted in The Strad, February 2019)

Philippe Graffin, along with other artists, will perform an Homage to Eugene Ysaÿe at the Shalin Liu Performance Center on Thursday, June 20, 2019 at 8 p.m.