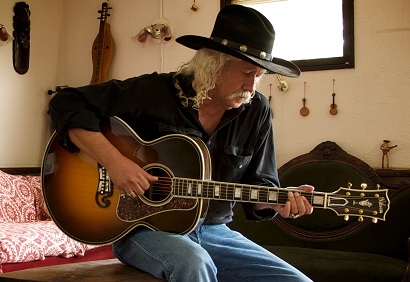 The folk music icon returns to Rockport this summer, and this time around he will be reviving one of his most cherished (but rarely played live) songs—the epic “Alice’s Restaurant Massacree” in honor of the 50th anniversary of the film Alice’s Restaurant. This is one show you won’t want to miss.

Says Guthrie of the legendary tune, “I didn’t think I was gonna live long enough to have to learn ‘Alice’s Restaurant’ again. It was a quirky kinda thing to begin with. Nobody writes an 18-minute monologue expecting fame and fortune. The initial success of the song really took me by surprise more than anyone else… I’m surely looking forward to it again being a centerpiece of my live repertoire.”

For the tour Guthrie will be joined by longtime collaborators Terry “A La Berry” Hall (drums), Steve Ide (guitar, vocals) and Carol Ide (vocals, percussion), as well as his daughter Sarah Lee Guthrie as an opening act.

A genuine member of folk music royalty, Arlo Guthrie continues to plumb the depths of the American musical spirit with his remarkable live performances that feature classic songs from his over 50 year career, as well as his trademark wry humor and storytelling.

Born in Brooklyn, Arlo Guthrie (the son of the legendary Woody Guthrie) was raised in an environment surrounded by a coterie of his parents’ artistic friends (Pete Seeger, Cisco Houston, Ramblin’ Jack Elliot, among many others), so it was no surprise that he followed his own musical muse. He became a regular fixture in the booming folk revival of the 60’s, developing his own particular style and unique voice. His high profile performances at demonstrations and social justice/protest rallies quickly made him a well-known figure and face of the political folk movement.

Guthrie’s career really took off in 1967 with the release of his now iconic Alice’s Restaurant album (which would later become the basis for a film of the same name starring Arlo). Lauded appearances at the Newport Folk Festival and Woodstock would further cement Guthrie’s burgeoning popularity. His smash hit cover of Steve Goodman’s “City of New Orleans” was released in 1972 and has since gone on to become an enduring American standard that will be forever associated with Arlo and his singular style.

Guthrie continued recording and performing throughout the decades, in the process starting his own independent record label called Rising Son. In addition to his music, Guthrie has stayed active in raising awareness and consciousness for a multitude of causes and projects.

Tickets: starting at $75
(Fees may apply)