Cabaret: A History and Evolution

A late-night concert series for Rockport Music—Classical Cabaret— features a casual, intimate 45-minute performance on the performance center’s third floor. This is an up-close and personal musical experience where the audience is just a few feet from the musicians sitting at café tables with a glass of your favorite beverage. This summer’s lineup of cabarets include works from musicals, a brass soirée, tango, and more.

To start: what is cabaret? Cabaret is more casual than a traditional show. A cabaret contains some type of performance, whether that be music, dance, or recitation, among other things. Usually, cabarets are held in settings that create more intimacy between the performer and the audience. Audiences are typically at small tables with some sort of drink. 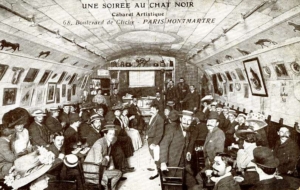 One of the earliest cabarets, Le Chat Noir in Paris

The word cabaret can be traced back to its French origins where it initially referred to any business serving liquor. The first cabaret as we know it now, however, was Le Chat Noir in the Montmartre district of Paris. It was designed to be a place where performers got to share ideas and test new materials, and the audience could enjoy nice evening for the price of a few drinks.

After WWI, cabarets reached high levels of popularity in Europe, particularly in Germany, where the Weimar Republic had just end almost all forms of censorship. By then, cabaret had evolved into the more intimate and interactive format known today.

One of the German cabarets in the Weimar Republic

In the United States, cabarets were more glamourous than intellectual. Dance floors became a popular addition to cabaret environments, and hours were stretched late. While many cabarets were wiped out during the Prohibition, the spirit transferred into speakeasies, and later, when the Prohibition ended, supper clubs.

As rock music grew popular, audiences grew less interested in seeing unknown performers, and many cabaret clubs were shut down. However, many small Manhattan clubs opened up in the following years and were referred to by some as cabarets after the popularity of the 1972 film version of Cabaret.

It was in cabaret that performers such as Kaye Ballard, Judy Holliday, Barbara Streisand, and Bette Midler found success. In New York, cabaret also hosted young comics such as Joe Stiller, Anne Meara, and Joan Rivers.

While cabaret does not share the same success it did in the early years, it has lived on and evolved into new forms, one of those being the classical cabaret. These events take the feel of the cabaret environment and combine it with classical or classically-inspired works.

The next in the Classical Cabaret series is Cabaret: Inspired by Beethoven tomorrow (Saturday, June 22) at 10 p.m.