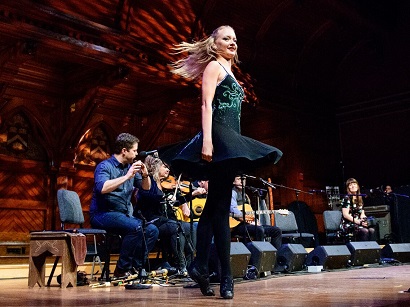 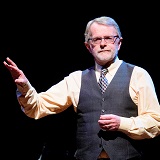 For over three decades, Brian O’Donovan has been hosting A Celtic Sojourn on WGBH, a program exploring traditional and contemporary music from around the Celtic world. He’s also well-known for his incredibly popular live concert series, A Christmas Celtic Sojourn, which he has presented at the Shalin Liu Performance Center for the past eight years. Additionally, for the past three years, O’Donovan has presented his Roots and Branches concerts at the South Shore Conservatory and Lowell Summer Music Concert Series where the overwhelming response has turned it into a beloved new summer tradition. Given the long-standing relationship with Rockport Music, it made perfect sense to bring this concert to the Shalin Liu Performance Center as well. For this year’s concert, O’Donovan will curate and host a range of traditional and contemporary artists from around the Celtic world, including singers, dancers, and virtuoso instrumentalists. They’ll be playing a mix of traditional tunes and more contemporary songs from the Celtic tradition, as well as some French Canadian, Acadian, Appalachian, Balkan, and American tap music. And of course there will be some surprises. O’Donovan loves the surprises!

The Boston Globe describes Robbie O’Connell as “a writer of timeless-sounding, emotionally powerful and often hilarious songs” and places him “among the most respected guitarists, singer and songwriters in Celtic music.” Born in Carrick-on-Suir in Co. Tipperary, Robbie is a nephew of the famous Clancy Brothers with whom he played internationally for over two decades.  His original songs have been widely recorded and his warmth on stage has become a hallmark of his concerts. For this performance, Robbie will be joined by fiddler (and fiddle maker) Rose Clancy.

Keith Murphy
Keith is a Newfoundland native steeped in traditional Celtic music and song as passed through the emigrant prism and melting pots of Eastern Canada and New England. He is a multi-instrumentalist and arranger who has been Music Director for Brian O’Donovan’s St. Patrick’s Day Celtic Sojourn series for the past 5 years. His recent CD “Land of Fish and Seals” has been receiving rave reviews in folk circles everywhere.

Joey Abarta
Held in high regard as one of the finest Uilleann pipers in America, Joey Abarta joins us from his home in Boston and brings a range of repertoire that is truly extraordinary.   The Uilleann pipes are a unique and complex instrument and at once capture the sounds of an ancient Ireland yet can inspire with the fresh energy of a rock guitar or saxophone.

Haley Richardson
Haley first took up the violin to learn Classical Music at age 3.  Soon afterwards, her mom brought he to see Kevin Burke – regarded as one of the best traditional Irish fiddlers in the World – and young Haley was hooked.  While still playing Classical music at a very high level, she has developed the skills and repertoire in Irish music that has some folks saying “the next Liz Carroll.”  At this concert, you’ll hear what they mean.

Kevin Doyle (dancer)
Doyle is a National Endowment for the Arts National Heritage Fellow. He achieved this highest honor awarded to an American traditional artist, as a dancer devoted to and inspired by steps brought to the United States by his Irish born mother in the the 1930s. Doyle is a delightful, compelling performer of old style traditional Irish step dance and American tap dance. A lifelong dancer and performer, Kevin was a U.S. Champion Irish step dancer in his early competitive years, and has been entertaining audiences ever since with his traditional style of “close to the ground” rhythms and intricate foot work as an artist, a choreographer, producer, and teacher.

Evelyn Miller (dancer)
Miller from Smithfield, Rhode Island, has been dancing and competing for fifteen years with the Goulding School of Irish Dance in Medford, MA and Cranston, RI. She has represented her school in national and international contests including the 2015 World Irish Dancing Championships in Montreal, Canada. Evelyn and her siblings have performed in a variety of venues in Rhode Island most notably The Blackstone River Theatre and The Providence Performing Arts Center. She joined A St. Patrick’s Day Celtic Sojourn in 2016, sharing with audiences the toe-tapping rhythms of traditional dance.

And welcoming Rory Coyne (accordion), and Seamus Noonan (flute/concertina) who are award winning young traditional musicians born in Massachusetts of well known musical parents. The next generation is in the house!!!

Thank you to our Summer at Rockport Corporate Partner!