This week, Rockport Music will be holding Chopin by Candlelight, a performance of the complete Chopin Nocturnes in a candlelit stage setting by London-based Australian pianist Piers Lane. While many know of Chopin for his famous compositions, less know about the details of his life and what led up to these pieces. For this week’s composer spotlight, get to know Chopin better with a timeline of his life from the Rockport Chamber Music Festival program notes. 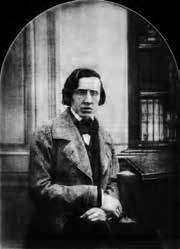 1816 First piano lessons from his mother, then from Adalbert Żywny.

1818 Charity concert in Warsaw, then many recitals in aristocratic homes.

1824 Enrolls at Warsaw Lyceum, where his father teaches. Begins to study harmony.

1825 Plays before Tsar Alexander I, who gives him a diamond ring. Publishes his Op. 1 (Rondo in C minor).

1830 Plays both piano concertos at his first public concerts in Warsaw. Leaves Poland for Austria, France and Italy.

1831 Unproductive time in Vienna. Homesick. Hears of Warsaw’s defeat by Russians. Writes his first 9 mazurkas. Arrives in Paris in October.

1833 Joint concert with Liszt. Friendship with Bellini, Mendelssohn, Berlioz. Warm critical reception to the young Pole from the critics.

1834 Earliest Nocturnes and other works (Opp. 8-19) now published simultaneously in France, Germany and England. Composes large-scale compositions like First Scherzo and Ballade rather than salon pieces.

1835 Falls in love with Maria Wodzińska. Visits Schumann in Leipzig. Falls seriously ill in Heidelberg. Rumors of his death.

“What an unattractive person La Sand is. Is she really a woman?” he says. 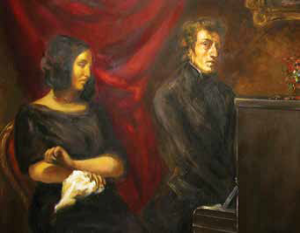 1840 Entire year in Paris, composing in the day in his own apartment, other hours with Sand in Pigalle.

1842 Another productive summer in Nohant, partly in company of Delacroix, culminates in Mazurkas, Op. 50 and other major works.

1843 Continues his practice of Summer composition in Nohant and teaching and socializing the rest of year in Paris. Withdraws from concert-life for five years.

1845 His own health again deteriorates. His sister Ludwika’s visit brings solace. A major rift in his relations with Sand develops.

1847 Chopin sides with Sand’s daughter Solange in entangled family relations, breaking with Sand. She describes it as “a strange conclusion to nine years of exclusive friendship.”

1848 Gives a final Paris concert. Concert tour and exhausting social round in England and Scotland under the guidance and sponsorship of a pupil, Jane Stirling, exhaust him further. Weighing less than 45kg, Chopin returns to Paris.

1849 Stirling offers more financial assistance. Ludwika and family arrive to nurse him through the summer. Chopin spends his final days in new rooms in the Place Vendôme where, celebrated singer Pauline Viardot remarks, “all the fashionable Parisian ladies considered it de rigueur to faint in his room.” Chopin dies there October 17, aged 39. At his own request, his heart is sent in an urn to Warsaw where it rests to this day. More than 3,000 invited guests attended his funeral at the Church of the Madeleine.