Compositions from Joseph Haydn are appearing in a few programs in the Rockport Chamber Music Festival, most notably in the programs of Richard Goode and the Aizuri Quartet. In this week’s composer spotlight, discover more about the history and life of Haydn.

Joseph Haydn (full name Franz Joseph Haydn) was born 1732 in Rohrau, Austria to a wheelwright and a cook for the village lords. Before he was six years old, Haydn was taken in and trained by a cousin, who was a school principle and a choirmaster. In 1740, he moved to Vienna as a chorister but was expelled from both the cathedral choir and the choir school after his voice changed. Haydn was later introduced to Austrian nobleman Karl Joseph von Fürnberg, in whose home he wrote his first string quartets. In 1758, Haydn was engaged as musical director and chamber composer for the Bohemian count Ferdinand Maximilian von Morzin, where he wrote his first symphony and many divertimenti.

The patronage that saw the most time with Haydn was that of the Esterházys, one the wealthiest and most influential families of the Austrian empire. During his time with the family, he conducted the orchestra and coached the singers in almost daily rehearsals, composed most of the music required, and served as chief of the musical personnel. Along with composing operas, symphonies, string quartets, and other chamber music, Haydn composed over 150 pieces for the baryton for Prince Miklós, who was an avid baryton performer. Haydn stayed in the service of the Esterházys until his death in 1809.

During his time under Prince Miklós, Haydn became close to Mozart. Mozart later declared that Haydn taught him how to write quartets and dedicated a set of six quartets to him. 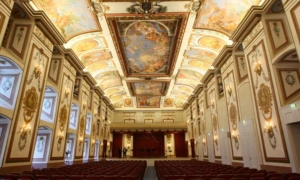 By 1785, a large amount of Haydn’s audience fell outside of the court. He composed his first large-scale oratorio, Il ritorno di Tobia, for the Musicians’ Society in Vienna in 1775, had the Viennese firm Artaria publish his six Opus 33 quartets, and composed his landmark Paris symphonies in this time period.

During a trip to Germany in 1972, Haydn was introduced to Ludwig van Beethoven. Beethoven moved to Vienna and received instruction under Haydn.

Two of the composer’s last works were able to be performed in both German and English. The oratorio The Creation was first publicly performed in 1798 and earned enormous popularity. It is believed to be the first musical work published with text underlay in two languages. The Seasons used an extended poem of the same name as the basis for a libretto.

Haydn’s total body of work includes 108 symphonies, one of which (number 106) is lost and one of which (number 105) is actually a symphonie concertante.There are 68 string quartets; 32 divertimenti for small orchestra; 126 trios for baryton, viola, and cello; 29 trios for piano, violin, and cello; 21 trios for two violins and cello; 47 piano sonatas; about 20 operas; 14 masses; 6 oratorios; and 2 cello concerti. Haydn was one of the most important figures in the development of the Classical style in music during the 18th century and helped establish the forms and styles for the string quartet and the symphony.