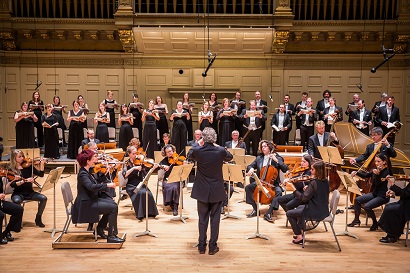 Handel’s iconic Messiah is a treasured holiday tradition that will be performed by the incomparable Handel & Haydn Society in a special chamber arrangement for 13-member chamber orchestra and chorus led by Associate Conductor Ian Watson.  The Yankee Magazine hails that “The Handel and Haydn Society’s Messiah remains unmatched.” This concert will be held at the First Congregational Church of Rockport (across the street from the Shalin Liu Performance Center).

One of the nation’s preeminent period orchestras, the Boston-based Handel and Haydn Society presents a critically acclaimed series each year at Symphony Hall and other leading venues. Founded in 1815, H+H is among the oldest continuously performing classical music ensembles in the United States, and is unique for its longevity, capacity for reinvention, and distinguished history of premieres.  Through the Karen S. and George D. Levy Education Program, H+H also provides engaging, accessible, and broadly inclusive music education to thousands of children each year.

As an orchestra considered masters of historically informed performances, audiences have the opportunity to hear the unique textures and dynamics afforded by period instruments and orchestras. Musical lines that might disappear in larger ensembles become clearer and more prominent, and the end result is a truly intimate and gratifying musical experience.  H+H began as a choral society founded by middle-class Bostonians who aspired to improve the quality of singing in their growing American city. In the first decades of its existence, H+H gave the American premieres of Handel’s Messiah (1818), Haydn’s Creation (1819), Verdi’s Requiem (1878), and Bach’s St. Matthew Passion (1879). Since its founding, H+H has given more than 2,000 performances before a total audience exceeding 2.8 million.

In addition to its performances, H+H reaches a worldwide audience through ambitious recordings including the critically-acclaimed Haydn The Creation, the best-selling Joy to the World: An American Christmas, and Handel Messiah, recorded live at Symphony Hall under Christophers’ direction.