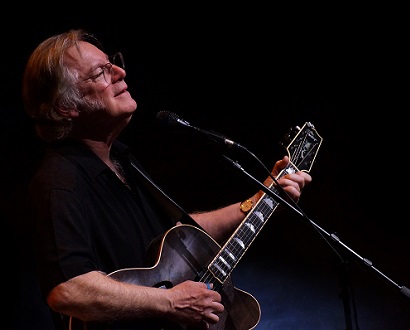 A folk rock icon, John Sebastian had a massive impact on pop music, leading his band The Lovin’ Spoonful (“Summer in the City” “Do You Believe in Magic”) as well as making a legendary spontaneous appearance at Woodstock. His subsequent solo career includes several acclaimed records and a smash #1 hit single, “Welcome Back,” the theme song to the beloved sitcom Welcome Back, Kotter.

Sebastian was born and raised in Greenwich Village, New York, coming of age smack dab in the middle of the folk boom of the late 50’s and early 60’s. As a teenager he performed in the now-iconic coffeehouses of his neighborhood, singing and playing harmonica in various jug bands. He was briefly In The Mugwumps, a folk group that also included Cass Elliot and Denny Doherty (of the Mamas & Papas) before striking out with his own band, The Lovin’ Spoonful.

Almost immediately the band shot to fame, their first single “Do You Believe in Magic?” racing to the top of the charts.  That began a wildly successful commercial run of hits that included tunes like “You Didn’t Have to Be So Nice,” “Daydream,” and “Summer in the City” among others.

Sebastian went solo in 1967 and released a few well-received records under his own name. His unscheduled appearance at Woodstock and its subsequent soundtrack threw him back into the public spotlight.  After a relatively fallow period in the 70’s Sebastian returned with another smash hit- “Welcome Back,” the infectious theme song to the hit sitcom Welcome Back, Kotter.

Throughout the rest of the last two decades, Sebastian eased into a steady performing and recording career, his most recent being a duo recording with mandolin hero David Grisman called Satisfied. He, along with the rest of Lovin’ Spoonful was inducted into the Rock n Roll Hall of Fame in 2000.

Tickets: starting at $35
(Fees may apply)