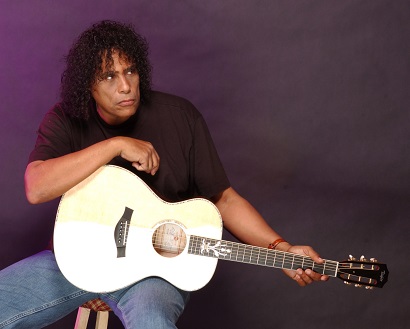 Jon Butcher’s signature sound, and particularly his guitar work, represent a skillful mix of Americana – rock, r&b, jazz and folk, all of it focused through a prism built from the blues.  His band, put together specially for just this one night, consists of a unique assortment of the finest blues and rock musicians working today.

The Grammy-nominated Butcher is one of a select handful of influential recording artists comprising the legendary Boston music scene. MTV videos and hit songs– “Life Takes A Life,” “Wishes,” “Holy War,” “Goodbye Saving Grace,” “Miracles,” “Send Me Somebody”– comprise the underpinnings of a recording and touring career that continues today.   An evening with Butcher takes you on an eclectic musical journey interwoven with his spellbinding stories.

His band, put together specially for just this one night, consists of a unique assortment of the finest blues and rock musicians working today.   Featured guests include:  Cliff Goodwin, former lead guitarist of the Joe Cocker Band; Mitch Chakour, former musical director, keyboardist and vocalist in the Joe Cocker band; Tomo Fujita, international touring musician and professor at Berklee to students like John Mayer and Eric Krasno of Soullive; John Anthony, drummer for AXIS; Jeff Keithline, and Megan Wolf of the Mad Dogs Tour round out this killer band.

Opening the evening is local guitar prodigy Quentin Callewaert, only on the music scene for a few years now at the ripe old age of seventeen, but already creating a major buzz as one of the most gifted guitarists around.   Quentin’s interest in fingerstyle acoustic guitar was inspired by Doc Watson, Merle Travis and Tommy Emmanuel. He is also a gifted singer with a refreshingly bluesy voice that compliments his blend of American roots music.   Expect to be wowed as he warms up this spring evening.

Jon Butcher and his hot band will be joining us at Shalin Liu Performance Center for a Spring Guitar Summit.  Expect to hear lots of old favorites, new music, and of course, that charismatic stage presence for which he is so well known.