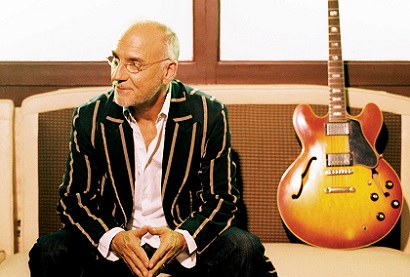 Larry Carlton is known as an immensely prolific Grammy-winning guitarist and composer that has mined the sonic sweet spot between smooth jazz, blues and funk since his emergence in the mid 70’s. After playing on hundreds of massively successful records, as well as stints with both The Crusaders and Fourplay, Carlton made a name for himself as a solo act with smooth jazz hits like “Room 335” and “Sleepwalk.”

"The work of his hands speaks grace, passion and timeless knowledge. Listen, learn and be profoundly moved" (Sting)

Born and raised in California, Carlton honed his guitar skills from a young age, falling in love with the sounds of Joe Pass, Wes Montgomery and B.B. King. Starting out in the clubs and cafes of Los Angeles in the 60’s, Carlton soon started getting regular studio work with an astonishingly diverse array of artists including Steely Dan (including the now iconic solo on their classic “Kid Charlemagne”), Joni Mitchell, Linda Ronstadt, Michael Jackson, Quincy Jones, Bobby Bland, Paulinho Da Costa, the Fifth Dimension, Herb Alpert, Dolly Parton, Andy Williams, and the Partridge Family among others.

Carlton’s solo work began in 1968 (With a Little Help from my Friends), but took a backseat with Carlton joining the jazz/funk group The Crusaders for several albums in the 70’s. In 1978 he returned to his solo career with an eponymous record that featured the radio staples “Room 335” and “Nite Crawler.” Carlton’s reimagined cover of the Santo & Johnny classic “Sleepwalk” made a sizable dent in the pop charts in 1981, which was also the same year he won his first Grammy, for his “Theme to Hill Street Blues.” He would go on to win three more Grammys.  In 1998 Carlton took Lee Ritenour’s place in the popular fusion group Fourplay, where he would remain for over a decade. His most recent records include live duo records with Robben Ford and David T. Walker and a studio record of re-recorded and reinterpreted songs called Four Hands and One Heart.

Tickets: starting at $49
(Fees may apply)