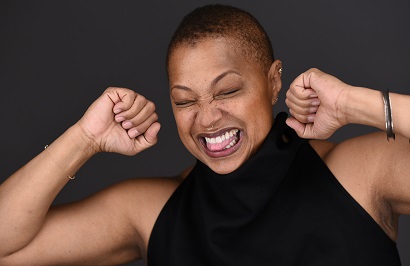 The Badass & The Beautiful

“Lisa Fischer in concert is addictive. Every performance is so enriching, so exciting, so transcendent that you want more. With remarkable vocal range and vocabulary, Fischer can sing soul, jazz, rock, gospel, pop, folk and classical with equal facility and authority. She often mixes styles in the same song, sometimes in the same vocal line. Her approach tends to be intimate, artful and almost meditative, accompanied by her interpretive dancing, but she also can cut loose and funk with fierceness and rock with abandon.” –Minneapolis Star Tribune

“At the top of her vocal game, thrilling fans with her range, her tone, and her charisma” – Parade Magazine

Ms. Lisa Fischer and her band first set out on tour in 2014, with no product to sell, no recordings or video to help book or promote shows, no t-shirts. Despite all that, based on Lisa’s reputation alone, they were invited to play in clubs, at the Newport and Monterey Jazz Festivals, and at concert halls all over the globe, winning accolades from critics, devotion from fans, and — always – invitations to return, soon.

"Ms. Fischer effused a pure joy and sometimes a pure anguish in the kind of singing that is rarely heard nowadays..." - The New York Times

After decades bringing raw soul to the stage for The Rolling Stones, Sting, Tina Turner and Nine Inch Nails, Lisa is emerging as the most inventive and heartfelt interpreter of classic rock songs working today.  Lisa won her first Grammy for “How Can I Ease The Pain,” from her 1991 album So Intense. With a hit song on the radio and a Grammy win, a major solo tour seemed inevitable, but Lisa was on the road, backing either her beloved mentor Luther Vandross or The Rolling Stones. Lisa was a legend in the music industry; everybody loved her sound. But she never put her own band together, never toured under her own name. Now, after years of supporting other artists, electrifying the world’s largest arenas with the power of her voice, Ms. Lisa Fischer has finally taken center stage.

The Oscar-winning 2013 documentary Twenty Feet from Stardom changed the course of Lisa’s musical journey. Featuring clips of Lisa’s legendary duet with Mick Jagger on “Gimme Shelter” and glowing testimonials from famous colleagues, the film showcased her virtuosity and vulnerability, earned her a second Grammy, and left audiences eager to see and hear more. “Ms. Fischer has become the unexpected star of Mr. Neville’s film,” said the New York Times. Now Lisa is exploring new territory. She is featured on new projects by Lang Lang, Yo-Yo Ma, Billy Childs, and recently collaborated with the Alonzo LINES Ballet.