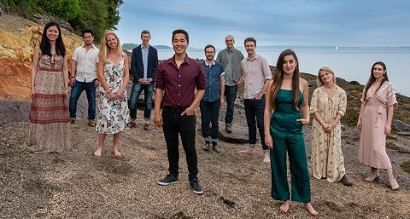 Palaver Strings is a musician-led string ensemble and nonprofit organization founded in Boston in 2014. Now in its fifth season, Palaver has established itself as a forward-thinking ensemble whose mission is rooted in community and creative programming. Palaver has performed at the Kennedy Center, the Shalin Liu Performance Center, and a celebration of the Lullaby Project at Carnegie Hall, and has toured the East and West Coasts of the United States. Palaver has been Ensemble in Residence at the Boston Center for the Arts since 2017, and continues a longstanding residency at Bay Chamber Concerts in Rockport, ME. Equally passionate about education, Palaver plans to open the Palaver Community Music School in Portland, ME in 2019, with the goal of fostering creativity and dialogue and making high-quality music education accessible to students of all backgrounds.

We hear about “fake news,” about media and the press bending public perception of current events, and we hear opinions stated as fact on all sides. Amidst the beauty and chaos that is freedom of speech and of the press, it can be challenging to discern truth from noise, and from prevailing public opinion. In this time of intense political polarization, what is “op-ed” and what is fact seems to depend on which side of the aisle you stand. In our Op-ed, Palaver Strings joins forces with Warp Trio to perform music by those whose voices have traditionally been suppressed, and who even today struggle to receive equal representation in our government, justice system, media, and concert halls.

We will premiere a commission by violinist, composer, and Warp Trio member, Josh Henderson which grapples with the legacy of public figures such as Assata Shakur who have been maligned by the media and in turn, have led movements for social change in response to widespread discrimination. Our program also features Dabke by Syrian-American composer Kareem Roustom, Florence Price’s Five Folk Songs based on African American spirituals, and Akenya Seymour’s Fear the Lamb, which memorializes the tragic story of Emmett Till and was written for Palaver Strings in 2019. Op-ed holds space to reflect on the continued fight for equity and just representation both in the world at large, and within the traditions of classical music. 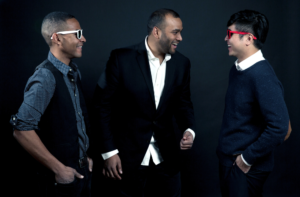 Described as “A talented group that exemplifies the genre-obliterating direction of contemporary classical music (Columbia Free Times)”, Warp Trio is an Internationally touring cross-genre chamber music experience. Reflecting the combination of Juilliard trained members juxtaposed with members steeped in rock and jazz styles, the one of a kind trio (that even has a fourth member!) can be seen performing classical works in prestigious halls on the same tour where they headline a standing room only show at a rock venue. In addition to their electrifying public performances, they have gained a reputation for their innovative educational workshops with students from grade school through university level.

Maintaining a busy performance schedule, Warp has performed hundreds of concerts all across the United States, in addition to tours throughout The United Kingdom, Spain, Switzerland, Holland, Germany, and the Caribbean. Highlights of recent seasons include, headlining performances at The LEM Festival for Experimental Music in Barcelona, the Sold-Out World premiere of their Triple Concerto for Piano Trio and Orchestra with the New York City based Urban Playground Chamber Orchestra, and being one of the honored recipients of a New York Foundation for the Arts Grant.