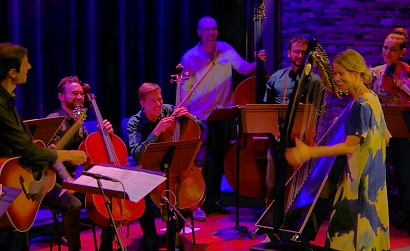 Last summer’s groundbreaking debut concert with this theme was such a success that we have made it a permanent part of the festival.  We will again bring together the best of the best in both traditional and classical string worlds and also incorporate our Scandinavian cross-over themes.  We have invited back the acclaimed 13 piece chamber orchestra Palaver Strings who will form a backdrop for many of the pieces.

In this year’s concert, we’ll hear new arrangements of traditional tunes, Baroque-era repertoire from both sides of the Atlantic as well as cutting-edge new music that will present traditional instruments in an entirely new light. The bringing together of two worlds – classical and trad – which historically have rarely met –  will be adventurous and exciting.  Thr concert’s theme represents a musical hand-shake between two rich traditions with mutual curiosity and respect. You don’t want to miss this unique event!

About the Rockport Celtic Festival

Brian O’Donovan & Maeve Gilchrist, artistic directors
For over three decades, Brian O’Donovan has been hosting A Celtic Sojourn on WGBH, a program exploring traditional and contemporary music from around the Celtic world. He’s also well known for his live concert series A Christmas Celtic Sojourn, as well as many other presentations around New England.  In partnership with Rockport Music and working in close collaboration with fellow Artistic Director, Edinburgh-born harpist/composer Maeve Gilchrist, Brian is proud to return with his 2nd annual Rockport Celtic Festival- Exploring Celtic Roots and Branches. Featuring a wide and quite extraordinary variety of new and familiar musicians, singers, dancers, and storytellers, the weekend will focus on the genre’s broad and vibrant range with a strong emphasis on crossover and collaborative work between musicians from different genres including classical, jazz, and American Traditional. This will be a dynamic and interactive weekend featuring mainstage concerts, workshops, intimate salon-style sessions in our third floor space, and much more.

This will be a gathering rarely, if ever, seen before.

Thank you to our Celtic Festival Corporate Partners!