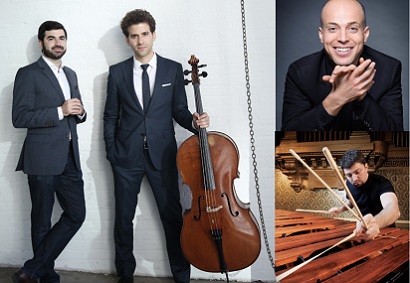 The Soul of the Americas

The Soul of the Americas celebrates the rich tapestry of musical influences across North and South America, featuring the works of seven iconic composers. Aaron Copland’s El Salón México and George Gershwin’s Cuban Overture were directly inspired by their travels to those respective countries. Leonard Bernstein was an ardent champion of Latin American music, including the music of Brazilian Heitor Villa-Lobos and Argentinian Alberto Ginastera. Osvaldo Golijov settled in the United States but his music draws on his Argentinian roots. Samuel Barber was enamored with diverse musical styles, as seen through his nostalgic Souvenirs. Curated by Michael Brown and Nicholas Canellakis and joined by Orion Weiss and Ian David Rosenbaum, this program features unique combinations of piano, cello and percussion, and will take the listener on a sizzling journey through both hemispheres.

Described as “one of the most refined of all pianist-composers” (International Piano), Michael Brown’s unique artistry is reflected in his creative approach to programming, which often interweaves the classics and his own compositions.  Winner of the 2018 Emerging Artist Award from Lincoln Center and a 2015 Avery Fisher Career Grant, Brown performs throughout the nation as a soloist and in festivals. He was selected by András Schiff to perform on an international solo tour.  In addition to being an artist of the Chamber Music Society of Lincoln Center and a former member of CMS Two, he regularly performs recitals with his longtime duo partner Nicholas Canellakis.  From 2017-2019, Brown was Composer and Artist-in-Residence at the New Haven Symphony, which premiered his newly commissioned symphony and received a 2018 Copland House Residency Award.  Additionally, Brown was First Prize winner of the Concert Artists Guild Competition, a recipient of the Juilliard Petschek Award, and is a Steinway Artist.

A prolific recording artist, his most recent being a 2018 release of Mendelssohn and Beethoven on First Hand Records, as well as several collaborative albums with pianist Jerome Lowenthal, cellist Nicholas Canellakis, and violinist Elena Urioste.  He earned dual bachelor’s and master’s degrees in piano and composition from The Juilliard School, where he studied with pianists Jerome Lowenthal and Robert McDonald, and composers Samuel Adler and Robert Beaser. Additional mentors have included András Schiff and Richard Goode.  A native New Yorker, he lives there with his two 19th century Steinway D’s, Octavia and Daria.

Hailed by The New York Times for his playing being “impassioned … the audience seduced by Mr. Canellakis’s rich, alluring tone,” Nicholas Canellakis has become one of the most sought-after and innovative cellists of his generation, captivating audiences throughout the United States and abroad. Currently Artist-in-Residence with New Haven Symphony, Canellakis performs throughout the US, Europe and Asia as a member of the Chamber Music Society of Lincoln Center, as well as his long-time duo collaborator pianist-composer Michael Brown.  He is also a regular guest artist at many of the world’s leading music festivals, including Santa Fe, Ravinia, Music@Menlo, Bard, La Jolla, Hong Kong, Moab, Music in the Vineyards, and Saratoga Springs. Additionally, he became Artistic Director of Chamber Music Sedona in 2018.

​Canellakis is a graduate of the Curtis Institute of Music and New England Conservatory, where his teachers included Orlando Cole, Peter Wiley, and Paul Katz. He has also been in residence at Carnegie Hall as a member of Ensemble Connect.  ​Filmmaking and acting are special interests of Mr. Canellakis. He has produced, directed, and starred in several short films and music videos, including his popular comedy web series “Conversations with Nick Canellakis.”

One of the most sought-after soloists in his generation, pianist Orion Weiss has performed with numerous major American orchestras. His deeply felt and exceptionally crafted performances go far beyond his technical mastery and have won him critical acclaim.  In addition to performing as a soloist with the leading orchestras in the nation, Weiss performs regularly as a recitalist and chamber musician.  Named the Classical Recording Foundation’s Young Artist of the Year in 2010, in the summer of 2011 Weiss made his debut with the Boston Symphony Orchestra at Tanglewood as a last-minute replacement for Leon Fleisher.

During 2002-04, he was a member of the Chamber Music Society Two program and his impressive list of awards includes the Gilmore Young Artist Award, an Avery Fisher Career Grant, the Gina Bachauer Scholarship at the Juilliard School and the Mieczyslaw Munz Scholarship. A native of Lyndhurst, OH, Weiss attended the Cleveland Institute of Music, where he studied with Paul Schenly, Daniel Shapiro, Sergei Babayan, Kathryn Brown, and Edith Reed. In 2004, he graduated from the Juilliard School, where he studied with Emanuel Ax.

“When you’re named after one of the biggest constellations in the night sky, the pressure is on to display a little star power — and the young pianist Orion Weiss did exactly that…” – The Washington Post

Praised for his “excellent” and “precisely attuned” performances by the New York Times, percussionist Ian David Rosenbaum has developed a musical breadth far beyond his years.

Mr. Rosenbaum joined the Chamber Music Society of Lincoln Center’s CMS Two program in 2012 as only the second percussionist they have selected in their history. Additionally, he has appeared at the Bay Chamber, Bridgehampton, Chamber Music Northwest, Music@Menlo, Norfolk, and Yellow Barn festivals.  In 2017, Mr. Rosenbaum released his first solo album, Memory Palace, on VIA Records, featuring five commissions and collaborations with Brooklyn Rider and Gina Izzo.  Mr. Rosenbaum is a member of Sandbox Percussion, HOWL, the Pittsburgh New Music Ensemble, Foundry, and Novus NY. He has recorded for the Bridge, Innova, Naxos, and Starkland labels and is on the faculty of the Dwight School in Manhattan.

Thank you to our Fall-Spring Classical Corporate Partner!