Take This Waltz is a Rockport Music event exploring the waltz throughout the last 150 years. The Art of Time Ensemble will be performing a program filled different composers’ takes on the waltz. To prepare for this exciting event, here is an excerpt from the program notes about the waltz through history.

Leonard Cohen’s powerfully evocative 1986 “Take This Waltz,” which we’ll hear towards the end of tonight’s concert, is itself freely based upon the Canadian singer-songwriter’s translation of Federico García Lorca’s “Little Viennese Waltz,” a surreal, sensual poem of love, death, yearning and desire. Both mention Vienna and the waltz in the same breath. The waltz—that most enduringly malleable of dance forms—has likely had more impact on the creative musical world than any other dance form over the course of its two and a half century history. When Johann Strauss Jr. wrote the opening number on tonight’s collective dance card, his Op. 437, the waltz was at its high point. Viennese society was living the hedonistic high life, celebrating their Kaiser’s 40 years on the throne of the Austro-Hungarian empire. Strauss Jr. was Franz Joseph I’s reigning “Waltz King” and he was now turning out many of his best-known waltz creations. His publisher bestowed the Kaiser-Walzer (“Emperor” Waltz) heading to Op. 437 with an eye to sales of the dance. Strauss was by now targeting the concert hall as much as the dance floor—parts of the “Emperor” Waltz are, indeed, undanceable with a classic waltz step. Its sophisticated sequence of five inter-related waltzes, framed by slow introduction and coda, are a long way from the rustic waltzes of the coffee houses, beer gardens and Heurigen (wine taverns) of the villages surrounding the imperial capital. Arnold Schoenberg’s compact arrangement of the “Emperor” Waltz removes a thick layer of schlag from a large orchestra’s performance of Strauss’s Viennese confection—delicious though this may be, even today, in a New Year’s Day live concert from Vienna. In the process, Schoenberg skillfully exposes the underlying structure and lyrical melodies of this masterpiece.

When he penned the Emperor Waltz in 1888, Strauss Jr. already had hundreds of waltzes, years of band-leading and many waltz-rich operettas under his belt. He came from a line of “Waltz Kings.” His father, Johann Strauss Sr. (1804-1849), and Joseph Lanner (1801-1843) got their start in the less fashionable Viennese ballrooms and taverns, in the early days of the Viennese waltz. Both were playing before their teens in the dance orchestra of Michael Pamer. At 17, Lanner left Pamer to start a bare-bones ensemble of his own, made up of two violins and guitar. Soon, Strauss (viola) joined him and, with increasing success, they added a cello. It’s this quintet that Schubert would have heard many times at the Zum goldenen Rebhuhn café, near St. Stephen’s cathedral. Before long, the ensemble had added even more strings. Then, the band began to play several Viennese wine bars, beer halls and dance halls in the same night. Their stock-in-trade were the typical regional Austrian waltzes like the Ländler or Steirer and other triple-time “German Dances” (Deutscher) like the Dreher, Weller and Spinner which had been around for a half century or more. Lanner soon had to split the band into two and made Strauss conductor of the second ensemble. By now Lanner was also playing the city’s famous amusement park, the Prater. Strauss’s popularity also rose and, after the two men had a falling out and went their separate ways, Vienna found itself with two reigning “Waltz Kings.”

Together, these two musicians polished and refined the Viennese waltz and established a genre that would go on to worldwide renown. Lanner brought a winning lyricism to his compositions. Strauss, on the other hand, preferred a more dynamic approach to the rhythm. The Viennese used to put it this way: With Lanner it’s “Pray, dance! I beg you.” With Strauss, “You must dance, I command you!” 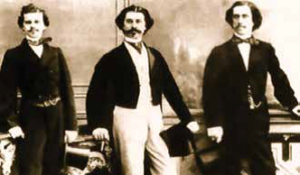 What all the early waltz-related dances have in common is that the couple dance in close embrace, above all in the waltz itself, with its whirling, twirling, gliding and intimacy. The waltz can trace its origins to the German word walzen, originally meaning a simple turning or rotating, rather than a specific dance. The waltz went on to conquer the dance halls, grand balls, opera and ballet houses, and concert halls of the world. In the salons of mid-19th century Paris, Frédéric Chopin turns to the waltz, accepts the conventions of the salon and transforms the dance into carefully crafted, emotionally wide-ranging concert waltzes. Chopin’s C-sharp minor Waltz, one of the gems of his output, carefully wraps graceful, bittersweet outer sections around a nocturnal D-flat center. A little later in the century, after editing Schubert’s 12 Ländler, D. 790, Johannes Brahms is inspired to follow Schubert’s lead in what he describes as “two books of innocent waltzes in Schubertian form.” Not for Brahms the fashionable ballroom dances of his adopted city of Vienna, but rather the Hausmusik tradition of a city where the piano reigns supreme in every middle-class parlor. But, while Brahms sticks to the single, rather than multi-waltz pattern in his 16 Waltzes, Op. 39, the sophistication he pours into their content belies his description of them as “innocent.” Op. 39 No. 3 for example, spins its entire 16-measure melody and subsequent development from a single rhythmic motif. Subtitled Dance in the Village Inn and structured as a sequence of waltzes, Franz Liszt turns a devilish waltz into a tone poem in his Mephisto Waltz No. 1. The powerful music is not only designed as one of Liszt’s most technically challenging pieces but also portrays the intoxicating and seductive power of the waltz at its most visceral. 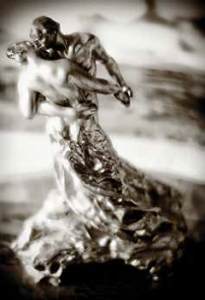 The Waltz, by Camille Claudel

In 1930, by the time that the 33-year-old, Vienna-raised Erich Korngold came to write his exquisitely crafted Waltz movement from his Suite for two violins, cello and piano (left hand), Op. 23, World War 1 and the fragmentation of the Austro-Hungarian Empire, its royalty and aristocracy, had forever changed the character of the pre-war waltz. Korngold’s music straddles the gulf between the few who still believed in the power of romantic melody to move the heart, and the more progressive who felt the way forward lay in radically changing the sound and structure of the music itself. His is a wistful, end-of-an-era waltz, uncertain of the direction to take—as was Korngold himself in life. Still, his music is undeniably evocative and of great beauty, a sad recollection of times past that can be no more.

In France, Maurice Ravel was already working on a symphonic poem to be called Wien (Vienna) when the Great War broke out. “It is a grand waltz,” he wrote at the time, “a kind of homage to the memory of the great Strauss—not Richard—the other, Johann!” By the end of the war, he had dropped the title and called his piece La valse. While the surface charm of the Straussian waltz appears to be present in La valse, there are unsettling undertones and snatches of uneasy tension that couldn’t have been written before the war. The fantastic and fatal whirling speaks of narcissism and the end of an epoch. The typical Viennese “lift” to the music seems ironic. In Ravel, the very bones of the waltz are laid out in front of us, picked over and fall apart, even as we listen.