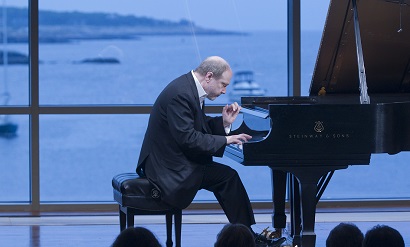 Our Gift of Music to the Community

Our Gift of Music to the Community

In the best interest of the health and safety of our patrons, staff and musicians, we are transforming our in-person Summer Gala originally planned for June 5, 2020 into a virtual event to be held on Saturday, June 27 at 5 pm.  In the midst of these unprecedented times, this event provides a unique opportunity for us to now offer our annual Summer Gala program to a much wider audience of not only our regular patrons but to our greater community and beyond.

Thank you to all the individual sponsors, gala ticketholders and corporate partners for making this gift of music possible during this difficult time!

Pianist Marc-André Hamelin is known worldwide for his unrivalled blend of consummate musicianship and brilliant technique in the great works of the established repertoire, as well as for his intrepid exploration of the rarities of the 19th, 20th, and 21st centuries – in concert and on disc.

He was a distinguished member of the jury of the 15th Van Cliburn International Piano Competition in 2017 where each of the 30 competitors performed Hamelin’s ‘Toccata on L’Homme armé’ which marked the first time the composer of the commissioned work was also a member of the jury. Although primarily a performer, Mr. Hamelin has composed music throughout his career; the majority of his works are published by Edition Peters.

Mr. Hamelin records exclusively for Hyperion Records. His most recent releases are a disc of Schubert’s Piano Sonata in B-Flat Major and Four Impromptus, a landmark disc of Stravinsky’s The Rite of Spring and Concerto for Two Pianos with Leif Ove Andsnes, Morton Feldman’s For Bunita Marcus, and Medtner’s Piano Concerto No. 2 and Rachmaninov’s Piano Concerto No. 3 with the London Philharmonic Orchestra and Vladimir Jurowski.

He was honored with the 2014 ECHO Klassik Instrumentalist of Year (Piano) and Disc of the Year by Diapason Magazine and Classica Magazine for his three-disc set of Busoni: Late Piano Musicand an album of his own compositions, Hamelin: Études, which received a 2010 Grammy nomination (his ninth) and a first prize from the German Record Critics’ Association.

Mr. Hamelin makes his home in the Boston area with his wife, Cathy Fuller. Born in Montreal, Marc-André Hamelin is the recipient of a lifetime achievement award from the German Record Critic’s Association. He is an Officer of the Order of Canada, a Chevalier de l’Ordre du Québec, and a member of the Royal Society of Canada.

“The pianist Marc-André Hamelin is fearless. No successful performer can afford to show fear from the stage, but with Mr. Hamelin, fearlessness is something more: a positive attribute, a confident calm that he exudes even while unleashing volcanic eruptions of sound and emotion.”  – New York Times

“Hamelin has established himself as the thinking man’s virtuoso, and virtuosity is his main hallmark. He just employs it a lot more interestingly than most.” – Washington Post

Thank you to our Corporate Partners for making this virtual event possible!