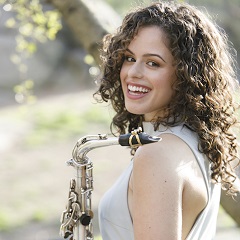 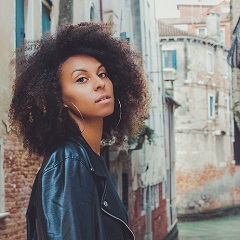 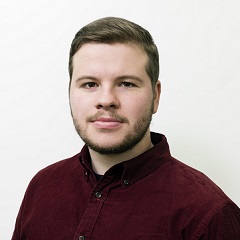 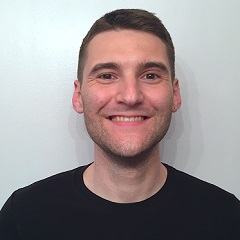 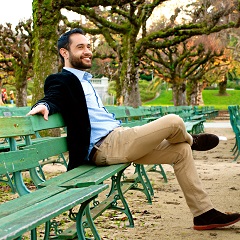 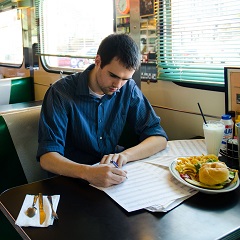 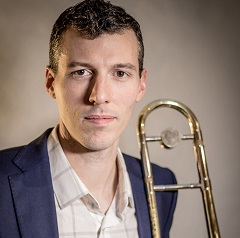 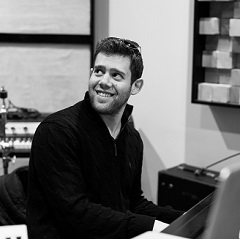 ALEXA TARANTINO, director
Alexa Tarantino is an award-winning, vibrant, young jazz saxophonist, woodwind doubler, composer, and educator. Alexa’s “exquisite soloing that is fresh, inspired, and original,” (Paul Rauch, All About Jazz) establishes her individual voice which shines through as a dynamic performer and educator.  Tarantino has played prestigious venues such as the Umbria Jazz Festival (with Ryan Truesdell’s Gil Evans Project), the Kennedy Center, the Hollywood Bowl (with Sherrie Maricle & the DIVA Jazz Orchestra), the Rockport Jazz Festival (Alexa Tarantino Quintet), Rose Theater at Jazz at Lincoln Center and the Kimmel Center for the Performing Arts (with Wynton Marsalis and the Jazz at Lincoln Center Orchestra), and the Xerox Rochester International Jazz Festival (with Earth, Wind & Fire, LSAT, and others). She performs regularly as a leader and sideman in a wide variety of ensembles and genres including Sherrie Maricle & the DIVA Jazz Orchestra, Arturo O’Farrill & The Afro-Latin Jazz Orchestra (holding a weekly residency at Birdland Jazz Club), LSAT (her new quintet co-led with baritone saxophonist Lauren Sevian), and the Alexa Tarantino Quartet.  Tarantino is currently on faculty for Jazz at Lincoln Center’s Youth Education Programs and directs one of their High School Jazz Academy big bands. Previously, she served as Jazz Saxophone Instructor at Hobart and William Smith Colleges. Tarantino continues to visit several colleges, high schools, and summer jazz programs across the globe as a guest clinician, including the Rockport Jazz Workshop (MA), of which she is Founder and Director.  She holds degrees from the Eastman School of Music and is currently pursuing her Master’s Degree in Jazz Saxophone Performance at The Juilliard School. Tarantino is a graduate of Hall High School’s award-winning music program in West Hartford, Connecticut and currently resides in New York City.

ALITA MOSES
Alita Moses is a Connecticut-born, Philadelphia-brewed, and award-winning vocalist taking the music scene by storm. After earning a BM in Jazz Vocal Performance from the University of the Arts, she made her way to New York City where she has performed with Vic Mensa on The Late Show with Stephen Colbert, recorded with members of the Christian McBride Big Band, and wowed audiences of famous venues such as Rockwood Music Hall, Mercury Lounge, Joe’s Pub, and many more.  Internationally, Alita has toured Europe with the Walter Fischbacher jazz trio, opened up for Al Jarreau at the Montreux Jazz Festival in Switzerland after winning the Shure Montreux Jazz Vocal Competition the year before, and, most recently, made her debut in China at Jazz at Lincoln Center Shanghai with the Benny Bennack III trio. Although she’s based in NYC, Alita’s versatility is bringing her all over this summer, namely to the Jacksonville Jazz Fest with her neo-soul band, Lohai, and Bonnaroo with pop artist, John Splithoff in June. On top of it all, Alita teaches private voice lessons in NYC and is very excited to return to the Rockport Jazz Workshop for her third year in a row.

EMILIANO LASANSKY
Emiliano Lasansky is a jazz musician, bassist, composer and educator currently based in New York City. Originally from Iowa City, Iowa, Emiliano is the grandson of artist Mauricio Lasansky and was born into a family of visual artists. From an early age he spent much time in his families’ studios surrounded by their art. Emiliano began on violin and electric bass at a young age, but switched to upright bass as his interest in jazz grew. After graduating from Iowa City West High, Emiliano attended the Eastman School of Music in Rochester, New York where he studied with Jeff Campbell. While at Eastman Emiliano was a member of the Eastman Jazz Ensemble under the direction of Bill Dobbins among many other ensembles. After graduating from college, Emiliano began freelancing in the upstate New York area for a time before relocating to New York City in 2017.

ERIC METZGAR
A native of Rochester, NY, Eric Metzgar performs regularly around the United States and Canada. He is an in-demand drummer and versatile collaborator who offers his musicianship to jazz entertainer Jon Seiger, contradance band Tempest, and the Rochester Philharmonic Orchestra. Since 2005, Eric has had the opportunity to perform in the Rockport, Lewiston, Iowa City, and Rochester jazz festivals. He is a passionate educator deeply invested in music teaching and learning. Eric maintains a private studio and serves as a clinician at local and regional schools. He holds a BM in Jazz Studies and an MM in Music Education from the Eastman School of Music.

LEVI SAELUA
Levi Saelua is a Sacramento-based composer/saxophonist. He began his jazz studies at Rio Americano High School under the direction of Craig Faniani and Josh Murray. Upon graduating, he furthered his musical studies at the Eastman School of Music, studying with composers Bill Dobbins and Dave Rivello, and saxophonists Chien-Kwan Lin, Jose Encarnacion, and Charles Pillow. He currently maintains a full schedule writing for and touring with groups based in Northern California, including the Shawn Thwaites Rebel Quartet, Tenor Explosion, and Triism, the winners of the 10th Bucharest International Jazz Competition in Romania.

NADJE NOORDHUIS
Combining cinematic sweep, transportive emotion, and rich melodic grandeur, Australian-born trumpeter/composer Nadje Noordhuis possesses one of the most unforgettably lyrical voices in
modern music. Her deeply-felt, clarion tone and evocative compositional gift meld classical rigor, jazz expression, and world music accents into a sound that is distinctively her own. Noordhuis was one of ten semi-finalists in the 2007 Thelonious Monk International Jazz Trumpet Competition and was selected as a Carnegie Hall Young Artist to undertake a weeklong residency with trumpet great Dave Douglas in 2010. Recent engagements include a yearly weeklong run at New York’s Village Vanguard with Rudy Royston’s 303, performances with the Grammy-winning Maria Schneider Orchestra, performances at jazz festivals in Europe, Canada and Brazil with Grammy-nominated Darcy James Argue’s Secret Society, and regular appearances with her group at the historic 55 Bar in Greenwich Village.

MIKE CONRAD
Dr. Mike Conrad is a composer, improviser, and teacher from Iowa. He has been recognized for his writing with four ASCAP Herb Alpert Young Jazz Composer Awards and seven Downbeat Awards, as well as awards and commissions from organizations like the Vienna Radio Symphony, the West Point Jazz Knights, and the American Society of Music Arrangers and Composers. Conrad’s arrangements have been performed all around the world, including a 2014 premiere at Carnegie Hall, and a performance at the US Presidential Inauguration in 2013. He continues to come up with fresh and exciting works for a variety of ensembles such as his unique 15-piece group, the All Angles Orchestra. Conrad has two Bachelor’s Degrees from the University of Northern Iowa, a Master’s Degree from the Eastman School of Music, and a Doctorate from the University of Northern Colorado. He is currently serving as Assistant Professor of Jazz Studies and Music Education at the University of Northern Iowa, and is in high demand as a clinician and guest director for jazz ensembles. Equally accomplished on both trombone and piano, Mike Conrad truly loves collaborating with other musicians, and always brings his creativity and expressiveness to every performance he gives and every composition that he writes.

NICK FINZER
An award-winning composer, arranger, and trombonist, Finzer is bringing the joy and power of Jazz to both traditional fans and the most modern 21st century audiences. He’s on a mission to be a passionate voice defining the sound of Jazz in this age while also bringing street cred to the trombone with a bold, tight sound. Born into the musical world, Finzer developed a fascination for the music of Duke Ellington and found himself, in high school, performing at the annual Essentially Ellington competition of Jazz at Lincoln Center. It was then that he decided to pursue a life in music himself. His budding talent was recognized by Wycliffe Gordon who began a life-long mentorship by writing four pieces for the young Finzer while he attended the Eastman School of Music. Nick went on to get his masters at Juilliard’s prestigious Jazz program where he was mentored by the trombone legend Steve Turre. Finzer has performed at top Jazz clubs and concert halls with Wynton Marsalis’ Jazz at Lincoln Center Orchestra, Lucas Pino’s No Net Nonet, Ryan Truesdell’s Gil Evans Project, Bob Stewart’s Double Quartet, Frank Wess, Terrell Stafford, Lewis Nash, the Tommy Dorsey Orchestra, Walt Weiskopf, Slide Hampton, Frank Kimbrough, Carl Allen, Steve Turre and many more.

STEVEN FEIFKE
Steven Feifke is a sought after performer, orchestrater, and educator based in New York City. An avid composer and arranger, Feifke leads three regularly performing ensembles: a piano trio, a septet, and a full 17-piece big band, each of which plays music from Feifke’s own repertoire. When not composing for his own bands, Feifke can often be found working in a wide variety of settings ranging from stage to screen. He has written for and guest conducted orchestras and big bands alike, and some select TV appearances of Feifke’s music include Seinfeld’s “Comedians in Cars” with President Obama, and the hit show “Impractical Jokers” on TrueTV. As a pianist, Feifke maintains an active performance schedule both in and out of New York City at venues like The Blue Note, Smalls Jazz Club, and Dizzy’s Club Coca-Cola at Jazz at Lincoln Center. Feifke currently resides in Manhattan, and holds a bachelor’s degree in Jazz Studies and a minor in economics from New York University.