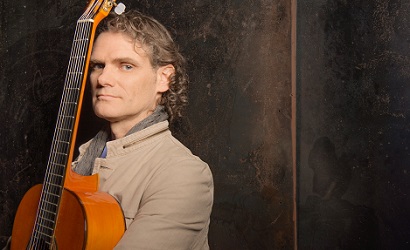 Jesse Cook travels the world with his fingers. Through his globe-spanning and genre-bending compositions, the nimble-fingered guitarist has taken nouveau flamenco to places it has never been, creating new fascinating hybrids.  As one of the most celebrated instrumentalists on the planet, Cook is forever restless, constantly searching for new sounds, rhythms and textures to explore.

Born in Paris and raised in Toronto, Cook studied classical and jazz guitar, and as a child was always intrigued by the highly rhythmic rumba flamenco style. Following up on that curiosity, Cook dove headfirst into the gypsy musical tradition as he began to find his own musical voice. After a show-stopping performance at the 1995 Catalina Jazz Festival, Cook’s little-heard debut, Tempest, suddenly took off in the U.S., landing at # 14 on the Billboard Charts. Cook’s career has seen steady growth in the years that followed, his multi-cultural take on rumba flamenco striking a nerve with listeners. One of the hallmarks of his sound and aesthetic is to travel the world, meeting and collaborating with artists and incorporating the results into his music. In addition to headlining concerts and festivals, he has opened for such legends as B.B. King, Ray Charles, The Chieftains and Diana Krall.

In 1998, Cook was nominated for a Juno Award as Instrumental Artist of the Year. In 2001, he received a Juno Nomination for Best Male Artist, as well as winning in the Best Instrumental Album category for Free Fall. In 2009, he was Acoustic Guitar’s Player’s Choice Award silver winner in the Flamenco category. He is a three-time winner of the Canadian Smooth Jazz award for Guitarist of the Year and numerous other awards.  Over twenty years into his career, Cook is now forging more than just musical traditions of the world. With his 2015’s One World, he is now forging the ancient with the modern, infusing contemporary sounds of the electronic digital age into his timeless rumba flamenco rhythms.

“…lightning fast and bright flamenco guitarist…Jesse Cook…is about as seductive, percussive and danceable as this kind of music gets…also a powerful pop songwriter, with each melody standing out above the weaving rhythms sung by his intoxicating strings.” Jazziz

Tickets: starting at $45
(fees may apply)